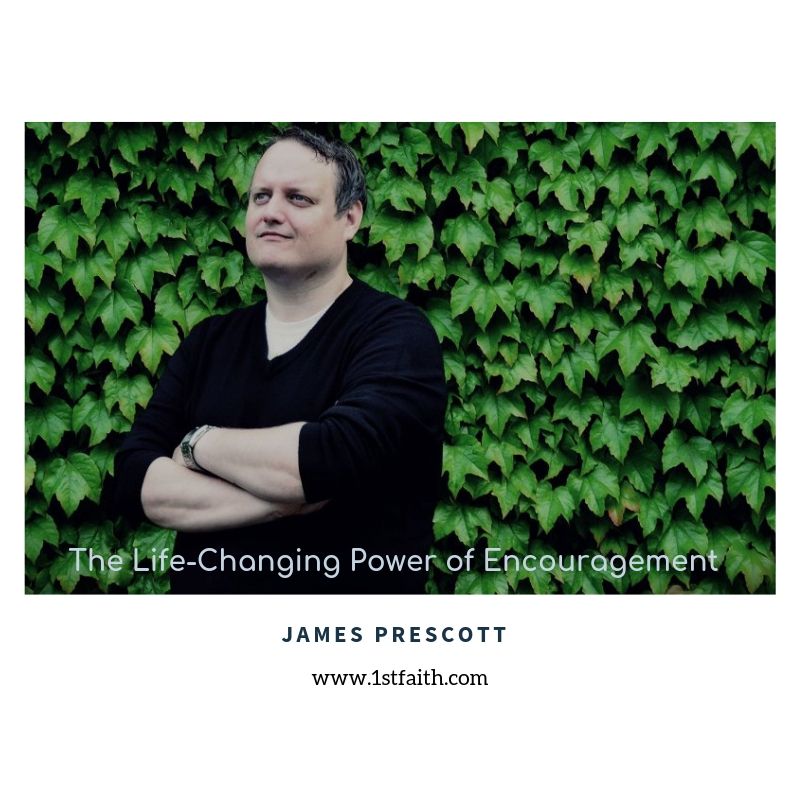 The Life-Changing Power of Encouragement

BY JAMES PRESCOTT–Words have such power don’t they? Especially words fed to us as we are growing up. The messages we hear through our teenage years have the potential to stay with us for decades to come.

The words I heard the most when I was a teenager were “You aren’t good enough.” At school I was the outsider, bullied and taunted every single day.

Home wasn’t too different either. My parents were right in the middle of a horrible break up. They had little time to encourage me. My Dad genuinely loved me and wanted the best for me. He wanted for me what he never had himself — academic achievement. But his way of getting the best out of me was to say what I had done wasn’t good enough.

So this phrase embedded itself in my heart. Deep in my subconscious.

Even now, 20 years later on, this script still repeats itself in my head.

Because when we get negative stories fed to us constantly, they sink in. They almost become scripts we follow. They are like lines of programming code — they keep themselves hidden from plain sight, but they have the power to influence who we are and what we do.

And there’s actually science behind this. Dr. Rick Hansen argues in his book “Hardwiring Happiness: The New Brain Science of Contentment, Calm, and Confidence,” that our brain has a negativity bias.

We find it much easier to remember negative comments than positive ones.

I sometimes joke that my brain has a ‘positivity filter’ which makes me forget positive comments and achievements. But there’s some science which says we need to focus meditate on something positive for at least 15 seconds for it to really sink in. Whereas negative comments sink in instantly.

Think about it. When you read comments on blog posts, you can get ninety-nine positive comments — but what’s the one you remember most? The one negative comment.

And when you get repeated negative comments, it’s going to do some damage.

This comment about not being good enough — said with the best of intentions — stayed with me. And the story I began to tell myself was that no matter how hard I worked, no matter what I achieved, was never, ever going to be good enough.

Even now, every time things even remotely go against me, there is still a voice which says,

This is the power of words.

It is why we need to be careful which people we listen to . . . and the words we use.

It’s why encouragement is so important.

Criticism, provided it’s constructive, can be useful. In small doses, it helps sharpen us and shows us where we can improve. But when taken too far, it’s very dangerous.

And in my experience, people are way too quick to criticise,

and way too slow to encourage.

I had a bad day recently. One of those days where everything which could go wrong, does go wrong. Small things, big things, all seem to pile on one another. We’ve all had them.

We just miss our train so we’re late for work.

We spill our coffee down our clothes.

We are discouraged by unfair criticism at work.

We get home and find we’ve run out of a key ingredient we need for dinner.

It was one of those days. I was pretty down. This ‘not good enough voice’ was getting plenty of ammunition, and inside I was having a rant at both God and myself.

But then I received a word of encouragement.

I got a message from a good friend calling me “Mr Encourager” and some tweets with some positive feedback from my blog. A post I’d thought wasn’t very special was getting an amazing response.

It was like scales falling from my eyes. Suddenly all the little annoying things vanished. It was as if they never existed. A light came on in the darkness.

My whole day was lit up by just a few encouraging words.

Back when I was younger, after receiving so little encouragement from anyone, I made a decision with myself.

I would take any opportunity I got to encourage.

I would never miss the chance to build someone up. To champion them. To point out the positives. I would never let what happened to me happen to someone else.

If there is a reason I am such an advocate for encouragement now, it’s this.

I cannot bear to see people being put down and constantly criticised in a way which is not helpful. With no one to build them up, support and encourage them. It makes me angry.

You see, if we keep feeding people negative words,

they will remember them…far more than the positives.

It’s human nature to remember negatives more than positives. So we must seek to encourage one another whenever we can.

And when we receive encouragement, stop, pause and meditate on it. For 15 seconds. Keep reading it, or reciting it to yourself in your mind. Stop and let it sink in.

So let’s start today. All of us.

I want to give you a small challenge:

This week, find one person and encourage them.

It doesn’t matter who it is. Simply find a person you know who needs encouraging and gently encourage them.

Then, try to build it up over time. Two next week, three the week after — whatever feels comfortable. Try eventually to get to a point where you’re encouraging at least one person each day.

Let’s get this world back into the habit of encouraging. Because if all of us can get into this habit, the world will be a brighter, more positive place. More the kind of world God wants it to be.

Today’s Guest Post comes from James Prescott, author of “Mosaic of Grace: God’s Beautiful Reshaping of our Broken Lives,” He can be found online at jamesprescott.co.uk.