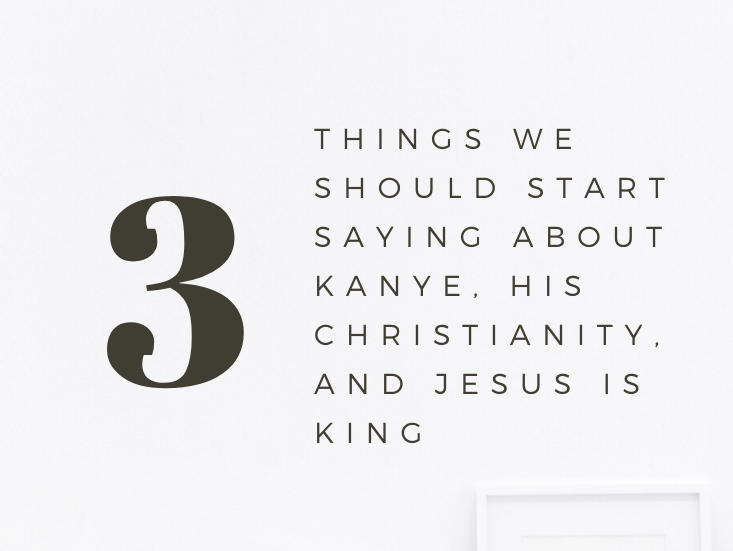 3 Things We Should Start Saying About Kanye West, his Christianity, and JESUS IS KING 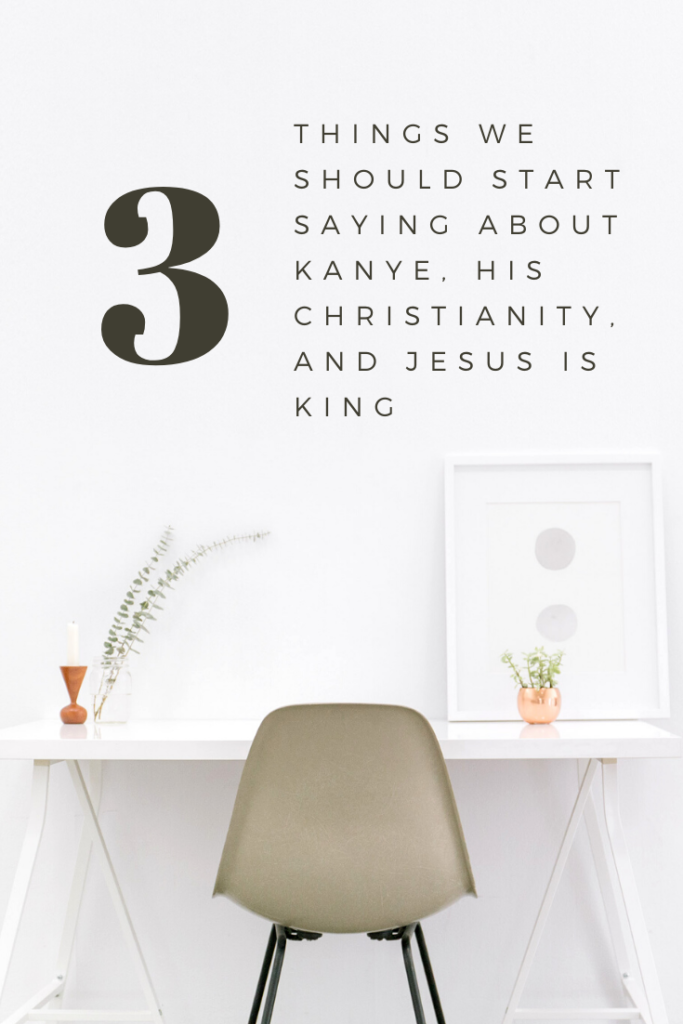 “What have you been hearing from the Christians? They’ll be the first ones to judge me, make it feel like nobody love me. Don’t throw me away, lay your hands on me. Please pray for me.” – Kanye

It’s time we challenge ourselves as Christians to be the best we can possibly be.

I’ve been scanning Twitter, Facebook, and Google over the past few days since I heard about JESUS IS KING, and there’s a genre of response creeping across my internet that I just don’t love. Before I start, let me say that all Christians are not responding negatively towards Kanye. I have seen Christians whoop and cheer on Kanye in his newfound Christianity.

I have seen Christians celebrating his new album, JESUS IS KING as well. However, the negativity I have seen towards Kanye from a few members of the Christian community is discouraging, because it is often negativity that seems like the loudest shouters. Negativity is the culprit which paints an improper image of a whole community.

However, we can change the narrative. Here are 3 things we should start saying about Kanye West, his Christianity, and JESUS IS KING.

“Kanye West is selling White Supremacy in the name of Jesus” (source: Twitter)

“What Kanye is doing is blasphemous. He is a wolf in sheep’s clothing deceiving.”

“Kanye’s decision to wear the Jesus hat instead of the Trump hat is a clear attempt for him to get back into the good graces of his people.”

This thinking, or some variant, popped up over the past few days in blogs and on Twitter. Statements like these that should give us pause. We should be careful about statements which rush to assume Kanye isn’t sincere for two reasons.

First, we don’t know. Why assume the worst?

Second, who are we helping with these statements? Kanye? Bueller? Anyone?

While Kanye West’s situation is national and international news, this isn’t the first time we’ve seen this happen.

On a smaller scale, many of us have seen the same situations in our churches and small groups. You know what I mean. It’s when that person with a checkered past wants to take on a serving role in a fellowship, yet is shot down by one person, or a small minority.

The reasons seem logical and sensible:

“She’s not ready. She has a lot of growing to do.”

“He’s still got a lot to deal with before being entrusted with leadership.”

Sure, we need to be cautious about pushing someone into a major role before they are ready. But too often, we create a “Christian Totem Pole,” where some always stay on top, forcing those with enthusiasm and excitement to wait your turn…and yet their turn never seems to arrive.

If we’re going to err, maybe we need to err on the side of opportunity. After all, Jesus allowed a woman at a well (check out John 4) to go out and evangelize within hours of telling her He was the promised messiah.

Or, what about the time Jesus healed a crazed lunatic and again, within just hours, Jesus was encouraging him to tell the story of his healing to proclaim the good news (Luke 8).

Jesus wasn’t super-concerned about waiting. We don’t need to be, either.

So, why the need to accuse instead of simply assuming the best? Perhaps this is out of a genuine concern to protect Christianity (and ourselves) just in case Kanye does decide Christianity isn’t for him. If by some chance Kanye’s conversion doesn’t pan out, we don’t want to look foolish for believing in his conversion too quickly.

So, let’s assume the best in Kanye. After all, we have nothing to lose. 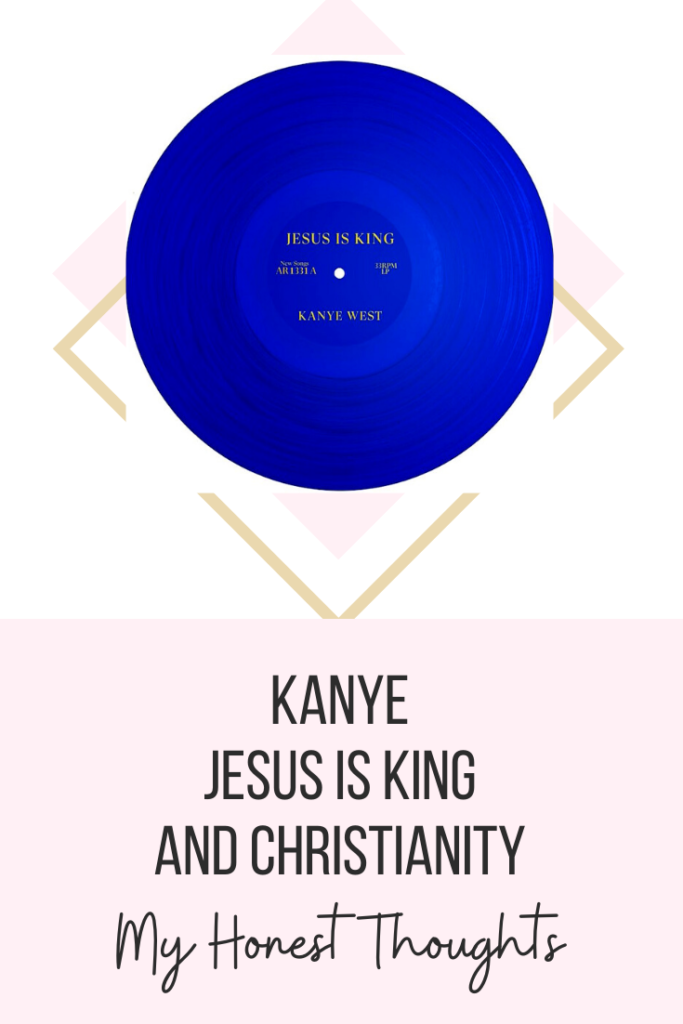 Probably the second most popular negative comment I’ve heard so far is “Just wait a few weeks and we will see how Christian he is.”

With comments like these, how can Kanye win? If he acts out in the slightest, he will be condemned. If he says something wrong, condemned. But even if he is somehow absolutely perfect, some may say, “Just wait a few more weeks.”

No one should be waiting for the big failure, least of all those of us who shout the love and redemption of Christ from the mountaintops. We of all people should rejoice over Kanye being found in Christ. After all, we too were all once lost and now are found. He deserves his seat at this table just as much as we do.

I’ve also seen people picking apart the people Kanye visits for conversations about his newfound faith. As Christians, we won’t always agree with each other. Between denominations, we tend to draw the lines pretty harshly at times.

Yet, if I’m in Kanye’s shoes and someone in the Christian faith reaches out to me and offers to chat, I’m going to jump all over it! Kanye is a self-proclaimed brand new Christian. He is figuring it all out. Let’s give him a chance to do just that.

We should applaud him for making an effort to learn more and have real discussions about faith with people. These are critical steps in deepening our faith, and he is out there taking them. Sure, we’ll disagree. But perhaps we should rise above the disagreement, above drawing lines in the sand. Let’s soar above the bickering over choosing Kanye’s “approved” mentors and let him figure it out.

There’s a bigger picture here: He is trying to grow. That’s a good thing.

So, let’s not “wait a few weeks.” Let’s cheer him on now, no matter who he seeks advice from. He’s just getting started. And besides, what do we lose if we cheer him on and he decides this isn’t for him after all? Nothing. We lose nothing by loving. Kanye is just starting to walk in his faith. Let’s help him run.

What Kanye needs are more cheerleaders.

3. Let’s Be Willing to Take a Chance on Kanye Rather than Give Him One

Another statement I’ve heard floating around is that we should give Kanye a chance. While seemingly positive, it still has a major “other” mentality. It’s still an “us vs. them” kind of thinking, and it still implies that we, as the “real” Christians, somehow have the authority to be the “chance-givers.”

It’s not my job or my responsibility to give Kanye a chance. Guess what? Kanye got his chance from God. And he will get infinitely more chances if he chooses to take them. Just like me.

If I think it’s my job to give Kanye a chance, or to decide if he is Christian enough, or any of these other things, I’m implying God doesn’t have it under control. It’s like I think that If I let all the rules and legalism go and instead just encouraging Kanye (or anyone else), all of Christianity could crumble into an oblivion without my guiding hand.

Here’s the reality: God has Kanye in the palm of His hand. Just like me. God will handle the hard stuff – it’s not my job. Loving is my job. And that’s it. We love. We encourage. We cheerlead. And with our love, we point people straight to the person who is perfectly equipped to do all the hard work of changing hearts and saving lives.

Let him go on his own authentic walk of faith. He is just getting started. Let him walk this path with God. Just like with my 4-month-old, I don’t correct him when he babbles instead of speaking coherently. I don’t scold him when his wobbly little legs give way when I stand him up while holding him. I cheer him on for every effort along the way. It’s all a step in the right direction – the same is true with Kanye West.

If we are honest with ourselves, we would see that the church is losing people, especially young people. We are hurting in this day and age, and more and more people don’t feel comfortable sitting in a pew on Sunday morning.

Jesus taught (Mark 9:38-41) that in this faith thing, if someone is not against us, they are for us. And if Kanye is for us, we realize he can reach a whole population of people many of us cannot. He has the opportunity to change the hearts and minds of a whole generation if he is truly for us. So let’s not “give him a chance.” Let’s take a chance on him. It’s wildly worth it if it works out. And again, we have nothing to lose by loving him and cheering him on, but we have everything to gain.

JESUS IS KING was a great idea – go you! My voice is small, but know I’m out here cheering you on from Tennessee.

And Kanye? I noticed that over the last weekend, your “Sunday Service” reached more than 1,000 young people who made new faith commitments. You go, Kanye West. You go.

Liked this post? Read more of my thoughts about faith here:

I Am the One Sheep 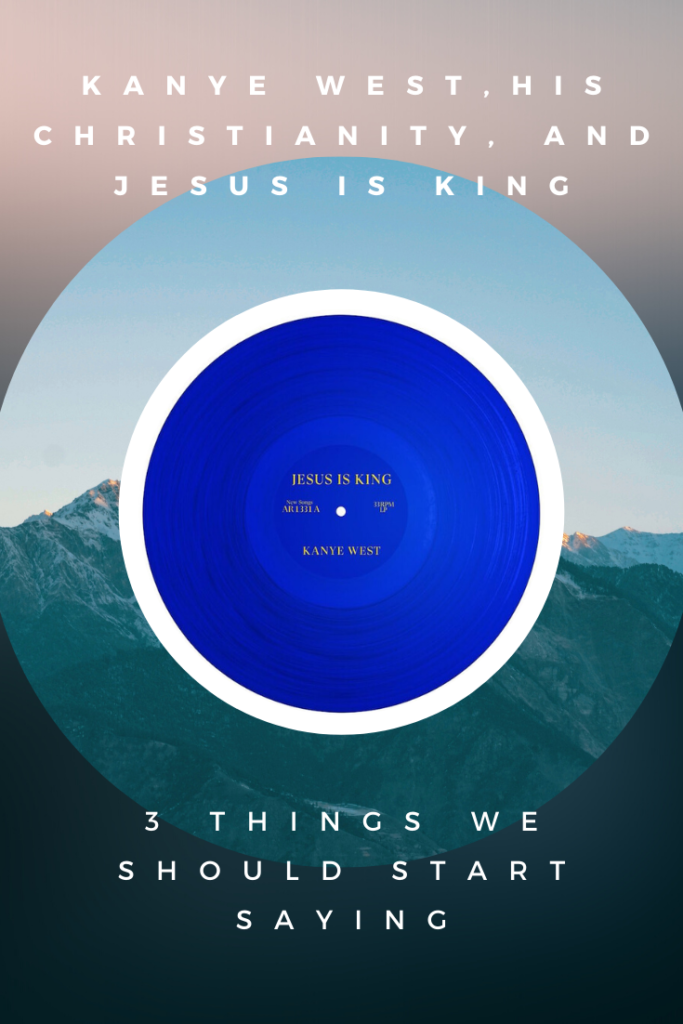