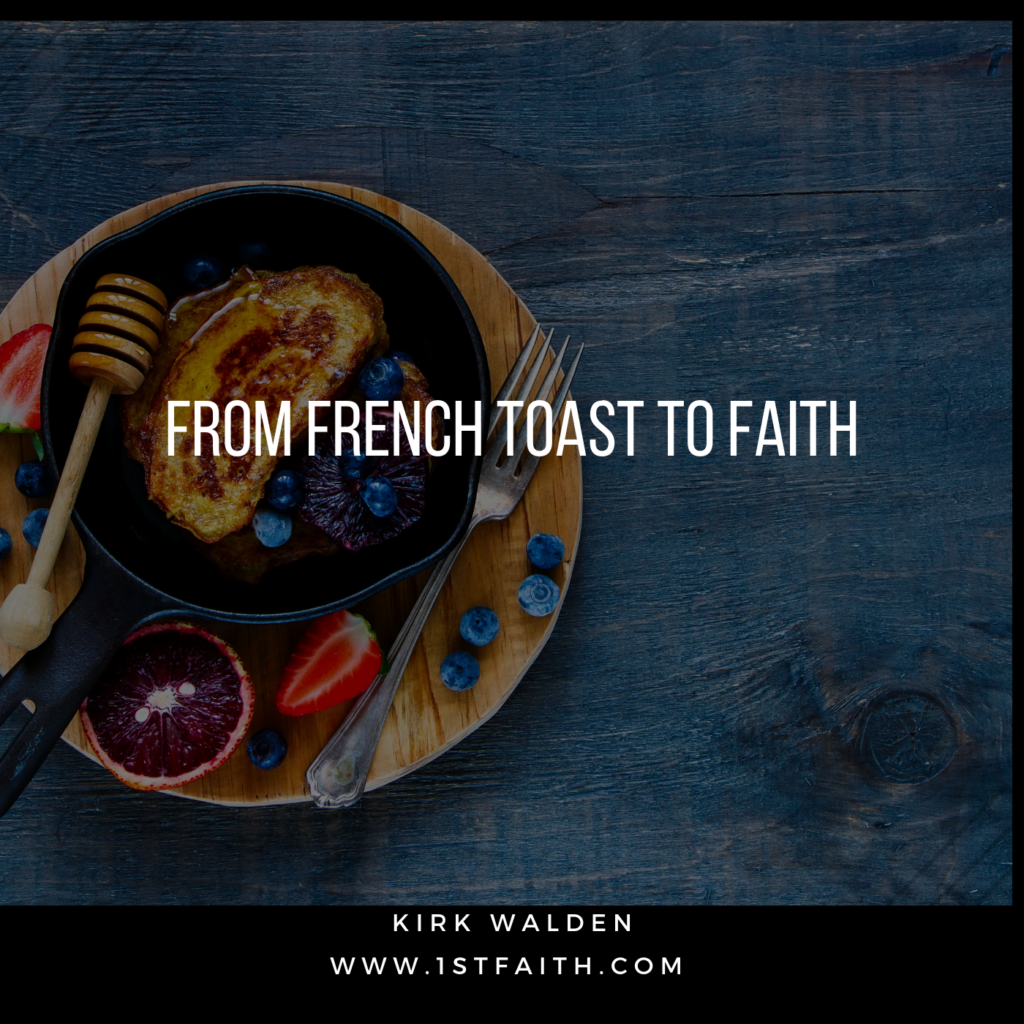 In 1997 (has it been 22 years? My goodness, I’m getting old), my cooking prowess extended to whipping up some french toast, but that was about it.

Perhaps I could pull off spaghetti or warm up microwaveables (which, I can tell by the red underline in my proof for this post, is not even a word), but back then, the kitchen was hardly my forte.

The challenge with this however, was that I had three children. And one day I received a call from my then–wife, who was out of town. During the call, she informed me that returning to our family was not on her agenda.

The emotional ramifications of this are for another post, another day. Suffice to say, if this has not happened to you, thank God. If it has, I don’t have to tell you a thing; you know. Pro tip; when you go to church and your pastor tries to smile and calls you “Job,” this is a hint that you’re in a tough spot.

Still, with all the whirlwind, my children–ages 7, 5 and 3–-presented a practical challenge for me. They needed to eat. Who would have thought they couldn’t whip things up on their own?

Though Burger King was just three minutes from our home, I–-being a wise sage even then–quickly figured we needed more options.

However, finding other eating out opportunities was expensive, even then. And, I was practically broke–-so there’s that. Somehow, I would have to learn to cook. Something. Anything.

One of my first attempts at feeding four mouths on my own was French Toast. I could do that much. Heck, all I needed were a few eggs (no shells–I knew this already), some milk, a dash of vanilla extract, a poof of cinnamon, and a contraption to beat senseless all the ingredients.

After that, just warm a griddle and smother it with butter. Almost done. From there, take a bunch of slices of bread, dip them in the bowl of goulash; toss ’em on the griddle. You might burn a few in the beginning but it all works out in the end.

French Toast is great for breakfast. And it can be a dinner, too. Yet, French Toast doesn’t work for all three meals, every day.

I was stuck, and with so much going on at once it wasn’t easy for me to take a cooking course. And remember, there was no “online” to find a YouTube video in 1997.

But a funny thing happened on my road to desperation and frustration. Hope showed up.

A few days after receiving the news that I was now a single father, I got a call from one of the women of my church. “Kirk, we’ve figured out you’re probably not a great cook,” she told me. “So you have those children home every Monday, Tuesday and Thursday night at 6:00, and we’ll have dinner for you.”

Three nights, every week. On a fourth, we visited another local church for Wednesday night dinner and participated in Bible studies and whatever they had the kids doing (which mine loved). It was a great way to build new relationships and strengthen my faith at the same time (let’s be real; things were a bit shaky at that point).

On the other four nights each week we figured it out. On some Fridays we were out at a ballgame and ate hot dogs or whatever was at the concession stand. Another night we might eat out, or I could drum up something. And of course, we had French Toast–usually once a week.

For months, we would be home and food would arrive right on time . . . giving me plenty of time to figure things out on my own.

This gift was was amazing, and, a perfect picture of what people of real faith do when one of their own is struggling.

It’s been said that Christians are the only group who kick their own when they are down. This was not the case with me.

In our family’s situation, those wanting to help surrounded us. They discerned exactly what we needed, and when we needed it. Because of these people–showing me what faith looks like–“me and three” not only survived, we thrived during my nine years as a single dad.

During this time I learned–through every day moments–how faith works. Faith is not always just the “big” moment when we see God do the amazing, though it can be.

But faith often grows in those seemingly small moments when someone brings over dinner, or says, “Let’s go get lunch” and actually listens to us when we need to vent.

Because of so many who walked with me and those three during those difficult years, my trust in God grew. Though there were times when my faith faltered, over time I could say, “God, while it doesn’t look good right now, I know you’re there somewhere.”

For me, that’s real faith.

I started this journey with nothing but French Toast. But in the process of watching others show me their faith, we–our family–found the recipe for building our trust in the God who cares enough to send friends when we need them most.

UPDATE
While I can still make French Toast, we now step it up for holidays. On Christmas, my wife Jennifer (married since 2006!) and our girls (well, they are grown up now) create the best French Toast in the world, courtesy of Joanna Gaines’ Overnight French Toast Recipe. Find it online here. If you haven’t tried it, you must.

Want to read more from Kirk? Check out his post, “Showing Up.”