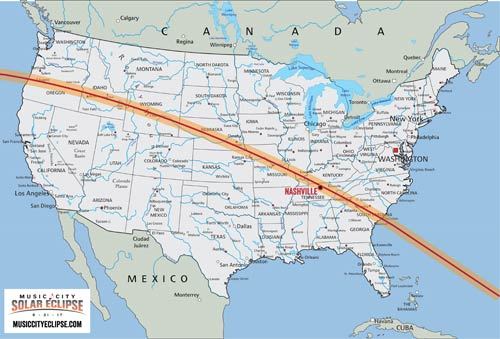 Today is the day. The Eclipse. The moon blocks out the sun. It is a Big. Stinkin. Deal.

And–not to brag here–but GOD put me right in the window of this baby. He likes me a lot. Okay, I know a few million people in and around Nashville, TN will see it, too. Oh, and there’s an entire path running across the USA, but whatever.

In my area outside of Nashville, hundreds of thousands of visitors are expected. One town just a few minutes away may see its population of 12,000 swell to almost a quarter of a million in just hours. Seemingly, everyone wants to see this.

Of course, I’m kidding. Eclipses come along in different ways to various places and this time my home happens to be in the path.

I’ll take the day off of work (mostly) and enjoy the fun with my wife and others in my family. A couple of friends may drop by.

But in the end, an eclipse doesn’t change my life or my mission, does it?

There’s a parallel here, between my kidding around above (“it’s all about me!”) and what we sometimes see in modern-day Christianity.

In 2016 there were a number of blood moons, and the prophetic “experts” were writing books and telling us of all the catastrophic events coming our way because of these signs–signs that we’ve seen every so often since the beginning of time.

Even with this eclipse, one can google “eclipse prophecies” and find a few who are trying to tell us they see something coming because they know so much more than the rest of us spiritual rubes who just don’t understand the deeper things of God.

And I’ll be honest enough to say I don’t study prophecy much; but there is a reason. While prophecy of future times is certainly in the Bible (uhhh, Revelation might be an example), the simple truth is that those who first spread the message of hope focused on the message, not on what might happen in the future.

They had plenty to share already, right? Their message was simple and powerful; God raised Jesus from the dead (all over the Book of Acts) and he is now our Lord and Christ (Acts 2:36 along with about a gagillion other references).

With that message was the idea that if we follow and trust in Jesus Christ, we get something called eternal life (for a definition, in John 17:3 Jesus says, “And this is eternal life, that they may know You, the only true God, and Jesus Christ who you have sent”).

This is the stuff that meant something to them. We don’t read much in the gospels, Acts or the letters about stars, moons, eclipses. It’s not that these things aren’t interesting. Nor would we say that God can’t use these as signs; He can.

But if we focus all of our efforts on attempting to figure out just what an eclipse or a special moon might mean in 2017, we miss the big picture.

The big picture? There is a world out there looking for hope. And if we know Jesus Christ, we need to share this hope as often and as effectively as possible.

Today’s eclipse will be a blast; I’ve seen eclipses before but none like this. I’ve got the glasses and for three or four hours I’ll be enthralled.

But on Tuesday morning, it’s time to get back to the message; a message that’s just as powerful today as it was 2,000 years ago. And nothing can eclipse that.

PrevPreviousLearning From Chaco Choose Day
NextWhat’s Love Got To Do With It?Next
Facebook0Tweet0Pin0