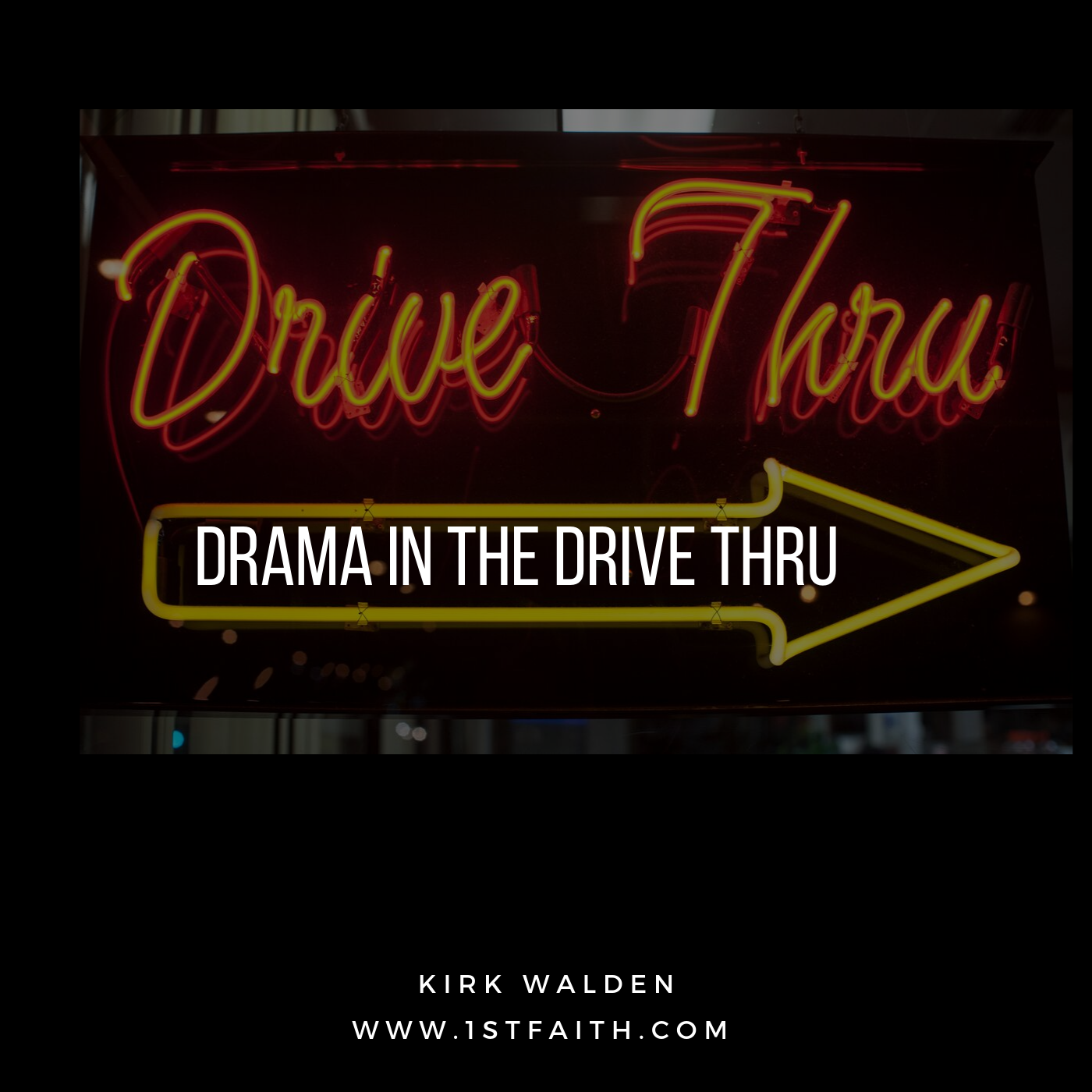 All Jenn and I wanted was a quick breakfast on a Saturday morning, a leisurely one. We stopped by a popular fast-food chain, hopped inside and ordered something or other and coffee. Ahhh, relaxation. No worries, no sweat.

I snagged my unhealthy order, checked my breakfast sandwich for an adequate supply of bacon and tromped to our table.

Behind me, I heard the swoosh of an opened door and angry footsteps. Don’t ask how I could tell the footsteps were angry ones, I just knew. Looking back, a middle-aged woman—wait, that’s my age—stormed the counter, clutching a bag of food she received in the Drive Thru. Ooooh. She was mad.

Her complaint? Apparently, they shorted her two items. I’m guessing hash browns and coffee, but this is purely conjecture.

She was loud. Therefore, we all got to hear the exchange—at least her end of things.

Kicking it Up a Notch

The server had a choice. To keep the decibel level down, he could just give her the missing items and get her outta there in a hurry.

But no. He was sure she misordered (that’s not a word, but I’m using it anyway). He questioned her. At length. And we had front-row seats. Back and forth they went, over two items which were worth about 40 cents to the fast food chain, with a whopping retail value of two dollars.

Therefore, hash browns and coffee had thus created an international incident. All we needed were cameras and signs and we could lead the evening newscast.

We Have a Winner

After two or three minutes of trying to make her case, she marched back to her car, retrieving her receipt. She slammed it down in front of the server, daring him to question her again.

With material evidence on the counter, the customer service specialist was defeated. With no other recourse, he gathered the coffee and hash browns, placed them in a bag, handed it over to the customer and without apologizing for escalating a simple complaint, wished her “a blessed day.”

From what I could see, she didn’t want to be blessed. Because after two trips into the main restaurant for a drive thru order, she was still raging. “I’ll never come back to this (insert name of fast-food chain) again!” she bellowed, making sure anyone within 32 miles could hear. With this, she snatched her bag, stomped to the door, opened it with another swoosh and was gone.

All of this gave Jenn and I great conversation fodder, as we compared this dining establishment with our local Chick-fil-A, where any request is met with a smile, prompt fulfillment and “my pleasure.”

Watching the Drama in the Drive Thru, the problem was easy to see. Instead of understanding his mission, the server got sucked into a debate over a minor issue. He decided to battle over whether the customer was right, instead of simply serving her well and inviting her repeat business (and selling a lot more hash browns and coffee in the future).

It makes me laugh to think about the server trying to be “right.” I wanted to say, “Pal, what are the odds that someone, after paying you for a meal, is going to stop their car, come inside your establishment so she can rip you off for two items that go for two bucks on the menu?”

I get that the server didn’t want to admit a mistake. We’ve all been there. But how hard would it be to just give the angry customer what she wanted and later figure out who made the error?

When it Comes to Faith, Don’t be That Server

But the exchange had me pondering the ways we talk about our faith. Here’s what I mean:

Chances are, we’ve heard someone challenge Christianity by saying, “The Bible says this, but that isn’t true because . . . .”

When this happens, we have a choice. We can be the fast-food server and get drawn into a minor debate. And, we may make a sound defense against whatever the complaint might be. Woo hoo! Victory!

But going back to Drama in the Drive Thru, let’s change the scenario. What if the server had been right? What if he proved—beyond a shadow of a doubt—she was wrong?

If so, he would save a multi-billion-dollar business 40 cents. But that customer—whom he publicly embarrassed for an honest mistake—would never come in there again. Over time, the restaurant would probably lose hundreds of dollars in business and she would tell her friends, hurting the business even more.

As for the dozen or so customers watching, same thing. Why go back to a place which shames any patron who makes an honest mistake?

Like I said, this taught me a valuable lesson. Because when it comes to my faith, it’s easy to get drawn into arguments by cynics who have complaints about this Bible verse or that one. But when we think of the larger mission, is debating our best response?

Our mission of course, is to introduce others to the one who leads us into the kingdom of God, the one who said the greatest commands are to love God with all we have, and to love our neighbor as ourselves. The one who says, “Come, follow me.” That’s the greatest mission.

Getting caught up in doctrinal and Biblical arguments–before introducing someone to the Jesus who soars above all debates—only builds a wall of conflict,  just like the customer and server created at the fast food restaurant.

Give ’em the Hash Browns and Coffee

This doesn’t mean agreeing with whatever Bible argument is thrown at me. But instead of digging in and coming out swinging, I can say, “You know, that’s something many people debate, and I hear you.”

From there, we can turn the conversation back to what faith is really about: Loving God, loving our neighbor . . . following Jesus with all we’ve got and living a life focused on connecting others to him.

By not arguing, I’m giving the skeptic their missing food items without any hassles. I’m saying, “Thank you for caring enough to engage with me. Let’s talk, anytime.”

The good news? By avoiding the temptation to debate secondary topics, it’s more likely the skeptic will come back and engage again, opening the door to talk about what it means to follow the man who brings us abundant life.

And while we might lose 40 cents on the first visit, the profits on those follow-up engagements can be more than we–and our skeptic–can imagine.

Like this story? Try The Wrong Guy to Launch 1st Faith.

Join me by Subscribing.

You can support 1st Faith here.